What inspired you to clean up this little park?

When moving into our house we were eager to get to know our new neighborhood. Curiosity took us all over. But Mill Race Park, being only a block away, was especially attractive.

Attractive as in having great potential. The park was overgrown with weeds and blackberries, the bushes had grown out of their beddings, the concrete floor and picnic tables were covered in moss and all the mulch had disintegrated. The area also proved to attract vagrancy and local fast-food and cannabis customers regularly leaving trash strewn around.

For a couple years I (Mitch) was employed as a park worker. So I knew what this little area could be if taken care off. I helped with similar community projects, so it was a small step to organize the project. I set realistic goals, picked dates, called friends, called the city and we went to work.

How did you get the city involved?

The city is always looking to empower citizens to take responsibility for their own neighborhood. The city tends to match people’s level of interest. The poor state of Mill Race Park reflected that none of the neighbors had shown interest in a long time.

When I contacted Tibby Larson, the volunteer coordinator of the Public Works Department, in no time we set up a cooperative effort where the city committed to providing professional people, tools and materials. It was very motivating to receive such support.

How was the community involved?

The city deployed three of their landscapers. I asked several friends and everybody showed up. We were never starved for hands during the two days it took us to do the cleanup.

What did the transformation involve?

We started by picking up trash followed by removing the blackberry vines from the public side of the fence. Then we weeded. Once the lawn was uncovered, it got mowed. Both bushes and trees received a substantial trim, bringing them back into shape. The exposed dirt was covered in mulch provided by the city. Finally we powerwashed all concrete surfaces, including the sidewalks and picnic tables. That got rid of the graffiti, too.

Since then the city replaced the sun-damaged information board per our request. They also installed, on their own initiative, a camera and more effective lighting.

How was the response from the community?

People definitely noticed, even stopping to ask questions or calling out supportive remarks while walking by during the cleanup. Today, when I walk my dogs, people still wave and, when the topic comes up, I can’t but joke they should come over and lend a helping hand next time we tackle the park. Nobody has taken me up on that offer yet.

It is great how the park is used more now: people play chess games, families have picnics, children and dogs play there.

I am now the City’s official Mill Race Park Partner. When walking our neighborhood I often take a trash bucket with me to pick up any stray litter. But the park itself will require another concerted effort once the Oregon spring entices the plants into explosive growth again.

Long term improvements to Mill Race Park would include fixing or replacing the old trash bin and trimming the lower branches from the trees. A good trim would allow the newly installed light to more effectively light up the area further deterring vagrancy and littering.

What advice do you have for neighbors wanting to organize a clean-up?

Ask for the city’s Volunteer Coordinator. They encourage direct volunteer participation and will liaison on your behalf with the city departments. Bring a small list of realistic goals to the table. Consider having the cleanup take place on weekdays, when most of the city employees are working and available to help.

In general it is easy to do, brings people together and makes a neighborhood safer. All good reasons.

Did you know that our City supports volunteers willing to work in their community parks? And did you know our City has a coordinator who helps volunteers navigate the City departments?

One reply on “How your neighbors cleaned up Mill Race Park” 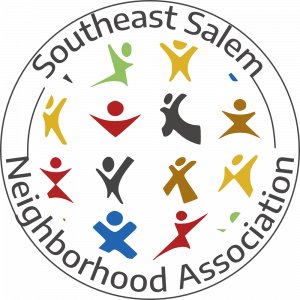